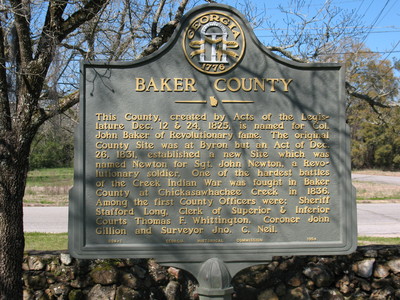 Baker County was created on Dec. 12, 1825. It was named for Col. John Baker, who was a member of Georgia's 1775 Provincial Congress and later served in the American Revolution. This marker is located outside the Courthouse in Newton, Baker County, Georgia.

" This County, created by Acts of the Legislature Dec. 12 & 24, 1825, is named for Col. John Baker of Revolutionary fame. The original County Site was at Byron but an Act of Dec. 26, 1831, established a new Site which was named Newton for Sgt. John Newton, a Revolutionary soldier. One of the hardest battles of the Creek Indian War was fought in Baker County at Chickasawhachee Creek in 1836. Among the first County Officers were: Sheriff Stafford Long, Clerk of Superior & Inferior Courts Thomas F. Whittington, Coroner John Gillion and Surveyor Jno. C. Neil."