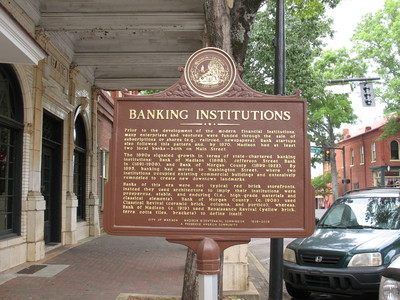 This marker was erected in 2011 by the City of Madison, Madison Bicentennial Commission 1809-2009, It is located outside the Madison Town Hall, in Morgan County, Georgia.

" Prior to the development of the modern financial institutions, many enterprises and ventures were funded through the sale of subscriptions or shares (e.g. railroad, newspapers). Bank startups also followed this pattern and, by 1870, Madison had at least two local banks -- both on Main Street.