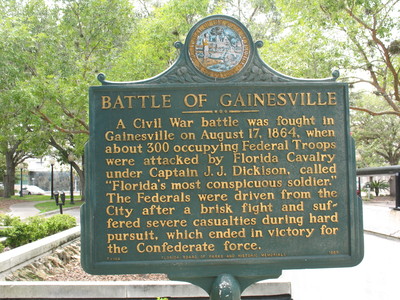 During the U.S. Civil War, the Battle of Gainesville took place on August 17, 1864, in Gainesville, Florida. Three-hundred Union troops occupying the city were attacked by the Florida Cavalry. The Federals were driven out of town and suffered significant casualties.

This marker is located in the plaza near the Old Library Building and City Hall in downtown Gainesville, Fl.

"A Civil War battle was fought in Gainesville on August 17, 1864, when about 300 occupying Federal Troops were attacked by Florida Cavalry under Captain J.J. Dickison, called "Florida's most conspicuous soldier." The Federals were driven from the City after a brisk fight and suffered sever casualties during hard pursuit, which ended in victory for the Confederate force."