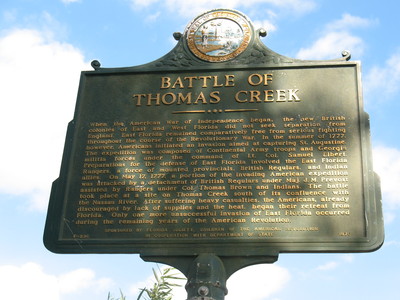 The Battle of Thomas Creek, or the Thomas Creek Massacre (May 17, 1777), was an ambush of a small force of Georgia militia cavalry by a mixed force of British Army, Loyalist militia, and Indians near the mouth of Thomas Creek in northern East Florida.

This historical marker about the Battle of Thomas Creek is located on Highway U.S. 1 at Thomas Creek, which is south of Callahan in Nassau County, Florida.

" When the American War of Independence began, the new British colonies of East and West Florida did not seek separation from England. East Florida remained comparatively free from serious fighting throughout the course of the Revolutionary War. In the summer of 1777, however, Americans initiated an invasion aimed at capturing St. Augustine. The expedition was composed of Continental Army troops and Georgia militia forces under the command of Lt. Col. Samuel Elbert. Preparations for the defense of east Florida involved the East Florida Rangers, a force of mounted provincials, British Regulars, and Indian allies. On May 17, 1777, a portion of the invading American expedition was attacked by a detachment of British Regulars under Maj. J.M. Prevost assisted by Rangers under Col. Thomas Brown and Indians. The battle took place at a site on Thomas Creek south of its confluence with the Nassau River. After suffering heavy casualties, the Americans, already discouraged by lack of supplies and the heat, began their retreat from Florida. Only one more unsuccessful invasion of East Florida occurred during the remaining years of the American Revolution."