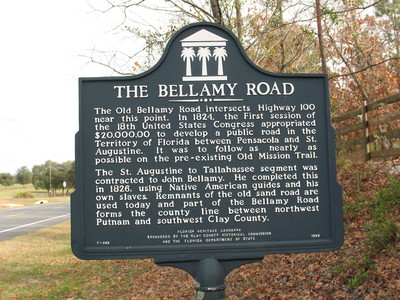 The Bellamy Road historical marker is located on State Road 100 in Clay County, Florida. It has been placed by the Clay County Historical Commission and the Florida Department of State, in 1998.

" The Old Bellamy Road intersects Highway 100 near this point. In 1824, the First session of the 18th United States Congress appropriated $20,000.00 to develop a public road in the Territory of Florida between Pensacola and St. Augustine. It was to follow as nearly as possible on the pre-existing Old Mission Trail.

The St. Augustine to Tallahassee segment was contracted to John Bellamy. He completed this in 1826, using Native American guides and his own slaves. Remnants of the old sand road are used today and part of the Bellamy Road forms the county line between northwest Putnam and southwest Clay County."