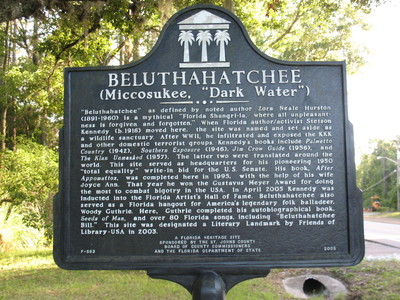 This marker is located on State Route 13 between Wedgewood and Roberts Rd. It was placed by the St. Johns County Board of County Commissioners and the Florida Department of State.

" Beluthahatchee" as defined by noted author Zora Neale Hurston (1891-1960) is a mythical "Florida Shangri-la, where all unpleasantness is forgiven and forgotten." When Florida author/activist Stetson Kennedy (b. 1916) moved here, the site was named and set aside as a wildlife sanctuary. After WWII, he infiltrated and exposed the KKK and other domestic terrorist groups. Kennedy's books include Palmetto Country (1942), Southern Exposure (1946), Jim Crow Guide (1956), and The Klan Unmasked (1957). The latter two were translated around the world. This site served as headquarters for his pioneering 1950 "total equality" write-in bid for the U.S. Senate. His book, After Appomattox, was completed here in 1995, with the help of his wife Joyce Ann. That year he won the Gustavus Meyer Award for doing the most to combat bigotry in the USA. In April 2005 Kennedy was inducted into the Florida Artist’s Hall of Fame. Beluthahatchee also served as a Florida hangout for America's legendary folk balladeer, Woody Guthrie. Here, Guthrie completed his autobiographical book, Seeds of Man, and over 80 Florida songs, including "Beluthahatchee Bill.” This site was designated a Literary Landmark by Friends of Library-USA in 2003."