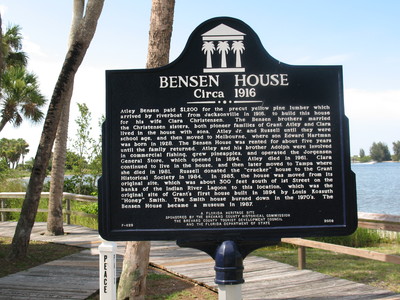 " Atley Bensen paid $1,200 for the precut yellow pine lumber which arrived by riverboat from Jacksonville in 1916, to build this house for his wife Clara Christensen. The Bensen brothers married the Christensen sisters, both pioneer families of Grant. Atley and Clara lived in the house with sons, Atley Jr. and Russell until they were school age, and then moved to Melbourne, where son Edward Hartman was born in 1928. The Bensen House was rented for about five years until the family returned. Atley and his brother Adolph were involved in commercial fishing, grew pineapples, and operated the Jorgensen General Store, which opened in 1894. Atley died in 1961. Clara continued to live in the house, and then later moved to Tampa where she died in 1981. Russell donated the “cracker” house to the Grant Historical Society in 1984. In 1985, the house was moved from its original site, which was about 300 feet south of 1st Street on the banks of the Indian River Lagoon to this location, which was the original site of Grant´s first house built in 1894 by Louis Kossuth “Honey” Smith. The Smith house burned down in the 1970´s. The Bensen House became a museum in 1987. "