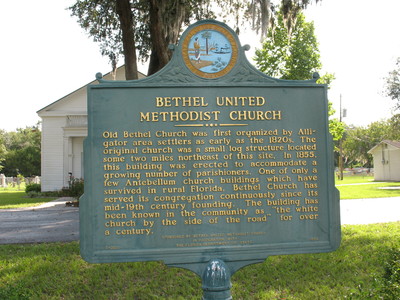 Bethel United Methodist Church is located at 4843 South US Hwy. 441 at County Road 133-B in Lake City, Florida. Known as Old Bethel Church, it was first organized by Alligator area settlers as early as the 1820s.

This marker is located on US 41/441 and sponsored by Bethel United Methodist Church In Cooperation With The Florida Department of State .

" Old Bethel Church was first organized by Alligator area settlers as early as the 1820s. The original church was a small log structure located some two miles northeast of this site. In 1855, this building was erected to accommodate a growing number of parishioners. One of only a few Antebellum church buildings which have survived in rural Florida, Bethel Church has served its congregation continuously since its mid-19th century founding. The building has been known in the community as "the white church by the side of the road" for over a century."