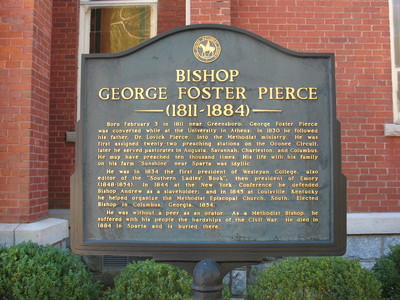 This marker is located one block west of downtown Greenboro, Georgia.

" Born February 3 in 1811 near Greensboro, George Foster Pierce was converted while at the University in Athens; in 1830 he followed his father, Dr. Lovick Pierce, into the Methodist ministry. He was first assigned twenty-two preaching stations on the Oconee Circuit, later he served pastorates in Augusta, Savannah, Charleston, and Columbus. He may have preached ten thousand times. His life with his family on his farm “Sunshine” near Sparta was idyllic. He was in 18343 the first president of Wesleyan College, also editor of the “Southern Ladies’ Book”, then president of Emory (1848-1854). In 1844 at the New York Conference he defended Bishop Andrew as a slaveholder; and in 1845 at Louisville, Kentucky he helped organized the Methodist Episcopal Church, South. Elected Bishop in Columbus, Georgia, 1854. He was without a peer as an orator. As a Methodist Bishop, he suffered with his people the hardships of the Civil War. He died in 1884 in Sparta and is buried there."