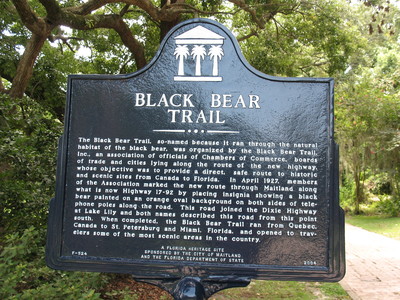 The Black Bear Trail once connected Quebec to St. Petersburg and Miami Florida. There are restored buildings around the shore of Lake Lily which are open for tours.

This marker has been placed by City of Maitland and Florida Department of State, in 2004.

" The Black Bear Trial, so named because it ran through the natural habitat of the black bear, was organized by the Black Bear Trail, Inc., an association of officials of Chamber of Commerce, boards of trade and cities lying along the route of the new highway whose objective was to provide a direct, safe route to historic and scenic sites from Canada to Florida. In April 1927, members of the association marked the new route through Maitland along what is now Highway 17-92 by placing an insignia showing a black bear painted on an orange oval background on both sides of telephone polls along the road. This road joined the Dixie Highway at Lake Lily and both names described this road from this point south. When completed, the Black Bear Trail ran from Quebec Canada to St. Petersburg and Miami Florida and opened to travelers some of the most scenic areas in the country."