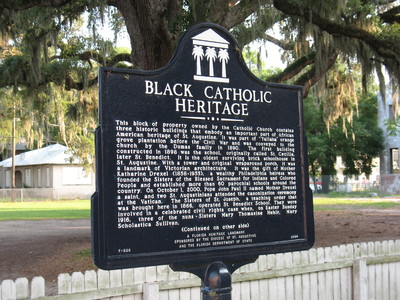 It is an historical marker about Black Catholic Heritage in St. Augustine, Florida, highlights a celebrated Civil Rights case involving three nuns. It is located at the site of the St. Benedict Moor Catholic Church, Rectory, and School .

SIDE 1 "This block of property owned by the Catholic Church contains three historic buildings that embody an important part of African American heritage of St. Augustine. The first building was constructed in 1898 was the school, originally called St. Cecilia, later St. Benedict. It is the oldest surviving brick schoolhouse in St. Augustine. With a tower and original wraparound porch, it was a landmark of Victorian architecture. It was the gift of Mother Katharine Drexel (1858-1955), a wealthy Philadelphia heiress who founded the Sisters of the Blessed Sacrament for Indians and Colored People and established more than 60 parochial schools around the country. On October 1, 2000, Pope John Paul II named Mother Drexel a saint, and two St. Augustinians attended the canonization ceremony at the Vatican. The Sisters of St. Joseph, a teaching order that was brought here in 1866, operated St. Benedict School. They were involved in a celebrated civil rights case when, on Easter Sunday 1916, three of the nuns - Sisters Mary Thomasine Hehir, Mary Scholastica Sullivan,"