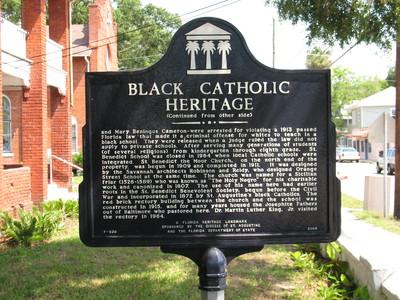 It is an historical marker about Black Catholic Heritage in St. Augustine, Florida, highlights a celebrated Civil Rights case involving three nuns. It is located at the site of the St. Benedict Moor Catholic Church, Rectory, and School .

SIDE2: "and Mary Beningus Cameron - were arrested for violating a 1913 passed Florida law that made it a criminal offense for whites to teach in a black school. They were released when a judge ruled the law did not apply to private schools. After serving many generations of students (of several religions) from kindergarten through eighth grade, St. Benedict School was closed in 1964 when local Catholic schools were integrated. St. Benedict the Moor Church, on the north end of the property, was begun in 1909 and completed in 1911. It was designed by the Savannah architects Robinson and Reidy, who designed Orange Street School at the same time. The use of his name here had earlier roots in the St. Benedict Benevolent Society, begun before the Civil War and incorporated in 1872 by St. Augustine's black Catholics. The red brick rectory building between the church and the school was constructed in 1915, and for many years housed the Josephite Fathers out of Baltimore who pastored here. Dr. Martin Luther King, Jr. visited the rectory in 1964."