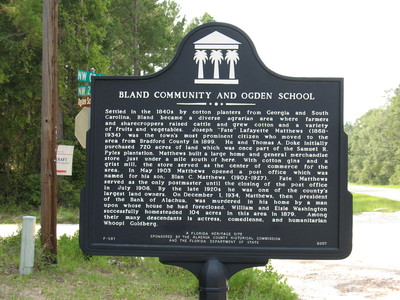 This is a historical marker located at the intersection of county Rd NW241 & NW 278 Avenue in Alachua County. It was erected in Erected in 2007 by The Alachua County Historical Commission and the Florida Department of State.

" Settled in the 1840s by cotton planters from Georgia and South Carolina, Bland became a diverse agrarian area where farmers and sharecroppers raised cattle and grew cotton and a variety of fruits and vegetables. Joseph "Fate" Lafayette Matthews (1868-1934) was the town's most prominent citizen who moved to the area from Bradford County in 1899. He and Thomas A. Doke initially purchased 720 acres of land which was once part of the Samuel R. Pyles plantation. Matthews built a large home and general merchandise store just under a mile south of here. With cotton gins and a grist mill, the store served as the center of commerce for the area. In May 1903 Matthews opened a post office which was named for his son, Blan C. Matthews (1902-1927). Fate Matthews served as the only postmaster until the closing of the post office in July 1906. By the late 1920s he was one of the county's largest land owners. On December 1, 1934, Matthews, then president of the Bank of Alachua, was murdered in his home by a man upon whose house he had foreclosed. William and Elsie Washington successfully homesteaded 104 acres in this area in 1879. Among their many descendants is actress, comedienne, and humanitarian Whoopi Goldberg. "