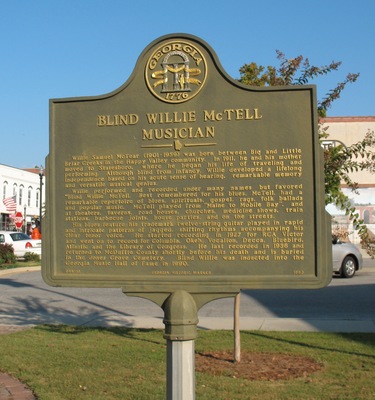 "Blind Willie" McTell was one of the great blues musicians of the 1920s and 1930s. Displaying an extraordinary range on the twelve-string guitar, this Atlanta-based musician recorded more than 120 titles. He was blind either from birth or from early childhood, and he attended schools for the blind in Georgia, New York, and Michigan.

" Willie Samuel McTear (1901-1959) was born between Big and Little Briar Creeks in the Happy Valley community. In 1911, he and his mother moved to Statesboro, where he began his life of traveling and performing. Although blind from infancy, Willie developed a lifelong independence based on his acute sense of hearing, remarkable memory and versatile musical genius. Willie performed and recorded under many names but favored “Blind Willie” McTell. Best remembered for his blues, McTell, had a remarkable repertoire of blues, spirituals, gospel, rags, folk ballads and popular music. McTell played from “Maine to Mobile Bay”, and at theaters, taverns, road houses, churches, medicine shows, train stations, barbecue joints, house parties, and on the streets. His blues feature his trademark twelve-string guitar played in rapid and intricate patterns of jagged, shifting rhythms accompanying his clear tenor voice. He started recording in 1927 for RCA Victor and went on to record for Columbia, Okeh, Vocation, Decca, Bluebird, Atlantic and the Library of Congress. He last recorded in 1956 and returned to McDuffie County shortly before his death and is buried in the Jones Grove Cemetery. Blind Willie was inducted into the Georgia Music Hall of Fame in 1990. "