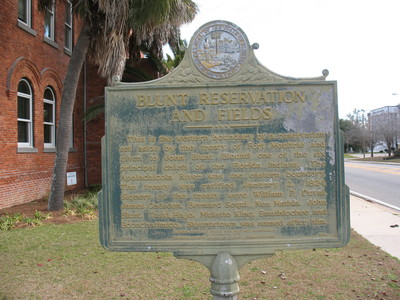 This historical marker is in Blountstown, Florida, on Highway 20. It was placed by Calhoun County Board of County Commissioners in 1964.

" This is the western boundary of a reservation set aside by the treaty of Fort Moultrie and given to John Blunt (Blount) one of the six principal chiefs of the Florida Indians. The Apalachicola River was the eastern boundary. The treaty was ratified January 2, 1824. Signers of the treaty were William P. Duval, James Gadsden, Bernard Sequi, Nea Mathla, John Blunt, Tuski Hajo, Mulatto King, Emathlochee and Econchatimico. Blounstown was named after him."