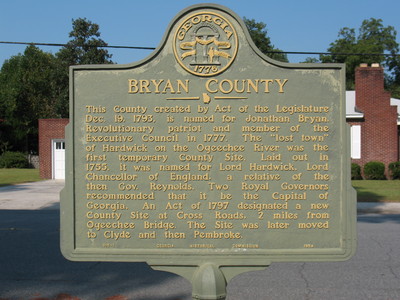 This marker is located outside the Bryan County Courthouse in Pembroke, Georgia. This was placed by the Georgia Historical Commission in 1954.

" This County created by Act of the Legislature Dec. 19, 1793, is named for Jonathan Bryan, Revolutionary patriot and member of the Executive Council in 1777. The ‘lost town´ of Hardwick on the Ogeechee River was the first temporary County Site. Laid out in 1755, it was named for Lord Hardwick, Lord Chancellor of England, a relative of the then Gov. Reynolds. Two Royal Governors recommended that it be the Capital of Georgia. An Act of 1797 designated a new County Site at Cross Roads, 2 miles from Ogeechee Bridge. The Site was later moved to Clyde and then Pembroke. "