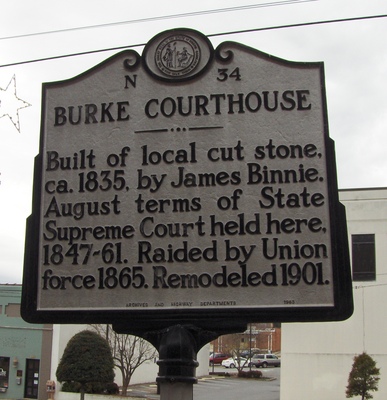 The Burke County Courthouse was built of native stone in the mid-1830s, Burke County’s historic courthouse is the oldest public building west of Salisbury and one of the oldest courthouses in the state. Supervised by Scottish architect James Binnie, the project was completed in 1837. The courthouse became the seat for the North Carolina Supreme Court’s August sessions between 1847 and 1862. During the Civil War, the courthouse was the subject of a Yankee raid, and was remodeled in 1901.

This sign was placed by the Archives and Highway Department in 1963, outside the courthouse.