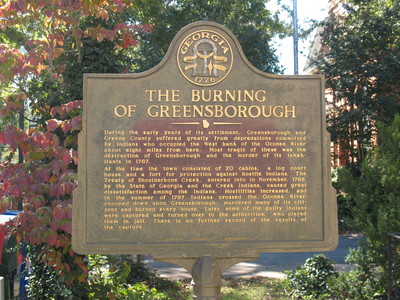 This historical marker is located outside the post office in Greensboro. It was placed by the Georgia Historical Commission in 1953.

" During the early years of its settlement, Greensborough and Greene County suffered greatly from depredations committed by Indians who occupied the West bank of the Oconee River about eight miles from here. Most tragic of these was the destruction of Greensborough and the murder of its inhabitants in 1787.

At the time the town consisted of 20 cabins, a log court house and a fort for protection against hostile Indians. The Treaty of Shoulderbone Creek, entered into in November, 1786, by the State of Georgia and the Creek Indians, caused great dissatisfaction among the Indians. Hostilities increased, and in the summer of 1787 Indians crossed the Oconee River, swooped down upon Greensborough, murdered many of its citizens and burned every house. Later, some of the guilty Indians were captured and turned over to the authorities, who placed them in jail. There is no further record of the results of the capture."