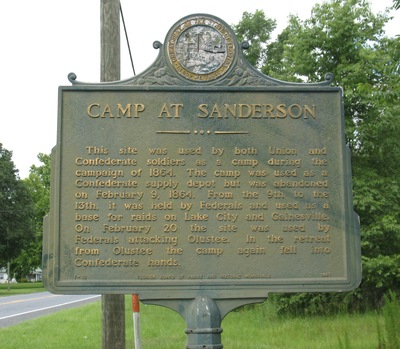 This marker is located on the U S Hwy.90 in Sanderson, Florida. It was sponsored by the Florida Board of Parks and Historic Memorials 1961 .

" This site was used by both Union and Confederate soldiers as a camp during the campaign of 1864. The camp was used as a Confederate supply depot but it was abandoned on February 9, 1864. From the 9th to the 13th, it was held by Federals and used as a base for raids on Lake City and Gainesville. On February 20 the site was by Federals attacking Olustee. In retreat from Olustee the camp again fell into Confederate hands."