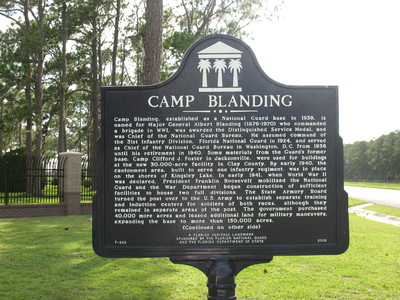 This marker is located on State Road 16 near Starke, in Clay County, Florida. It was erected by the Florida National Guard and The Florida Department of State in 2008.

" Camp Blanding, established as a National Guard base in 1939, is named for Major General Albert Blanding (1876-1970) who commanded a brigade in WWI, was awarded the Distinguished Service Medal, and was Chief of the National Guard Bureau. He assumed command of the 31st Infantry Division, Florida National Guard in 1924, and served as chief of the National Guard Bureau in Washington, D.C. from 1936 until his retirement in 1940. Some materials from the Guard's former base, Camp Clifford J. Foster in Jacksonville, were used for buildings at the new 30,000-acre facility in Clay County. By early 1940, the cantonment area, built to serve one infantry regiment, was in place on the shores of Kingsley Lake. In early 1941, when World War II was declared, President Franklin Roosevelt mobilized the National Guard and the War Department began construction of sufficient facilities to house two full divisions. The State Armory Board turned the post over to the U.S. Army to establish separate training and induction centers for soldiers of both races, although they remained in separate areas of the post. The government purchased 40,000 more acres and leased additional land for military maneuvers, expanding the base to more than 150,000 acres. "