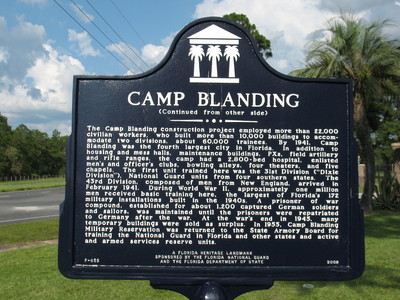 This marker is located on State Road 16 near Starke, in Clay County, Florida. It was erected by the Florida National Guard and The Florida Department of State in 2008.

" The Camp Blanding construction project employed more than 22,000 civilian workers, who built more than 10,000 buildings to accommodate two divisions, about 60,000 trainees. By 1941, Camp Blanding was the fourth largest city in Florida. In addition to housing and mess halls, maintenance buildings, PXs, field artillery and rifle ranges, the camp had a 2,800-bed hospital, enlisted men's and officer's clubs, bowling alleys, four theaters, and five chapels. The first unit trained here was the 31st Division ("Dixie Division"), National Guard units from four southern states. The 43rd Division, composed of men from New England, arrived in February 1941. During World War II, approximately one million men received basic training here, the largest of Florida's 142 military installations built in the 1940s. A prisoner of war compound, established for about 1,200 captured German soldiers and sailors, was maintained until the prisoners were repatriated to Germany after the war. At the war's end in 1945, many temporary buildings were sold as surplus. In 1955, Camp Blanding Military Reservation was returned to the State Armory Board for training the National Guard in Florida and other states and active and armed services reserve units."