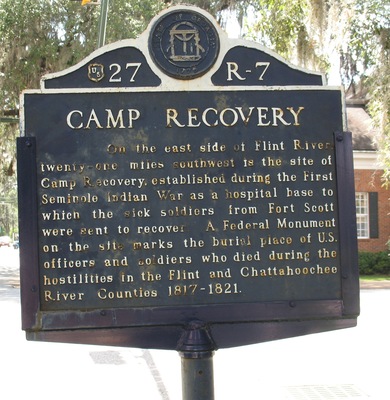 This is a monument on the site which marks the burial place of U.S. soldiers and officers who died here. Camp Recovery was established during the First Seminole War as a camp to help wounded soldiers. It was placed by the Historic Chattahoochee Commission and Decatur Historical Society in 1995.

" On the east side of Flint River, twenty-one miles southwest is the site of Camp Recovery, established during the First Seminole Indian War as a hospital base to which the sick soldiers from Fort Scott were sent to recover. A Federal Monument on the site marks the burial place of U.S. officers and soldiers who died during the hostilities in the Flint and Chattahoochee River Counties 1817-1821."