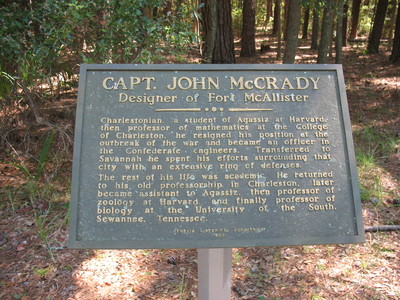 This marker is located at the Fort McAllister historical site. He designed the fort. It was placed by the Georgia Historical Commission in 1963.

" Charlestonian, a student of Agassiz at Harvard, then professor of mathematics at the College of Charleston, he resigned his position at the outbreak of the war and became an officer in the Confederate engineers. Transferred to Savannah he spent his efforts surrounding that city with an extensive ring of defenses.

The rest of his life was academic. He returned to his old professorship in Charleston, later became assistant to Agassiz, then professor of biology at the University of the South, Sewannee, Tennessee."