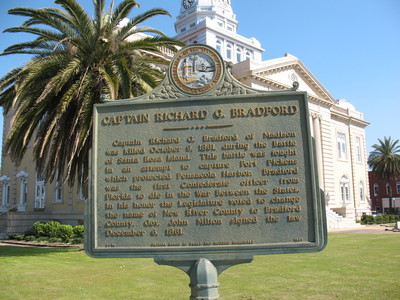 This marker is located on the grounds of the Madison County Courthouse in downtown Madison, Florida. It was sponsored by the Florida Board of Parks and Historic Memorial in 1961.

" Captain Richard G. Bradford of Madison was killed October 9, 1861, during the Battle of Santa Rosa Island. This battle was fought in an attempt to capture Fort Pickens which protected Pensacola Harbor. Bradford was the first Confederate officer from Florida to die in the War Between the States. In his honor the Legislature voted to change the name of New River County to Bradford County. Gov. John Milton signed the law December 6, 1861. "