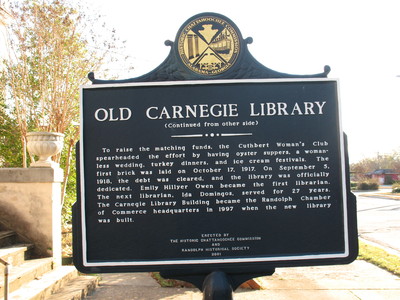 This marker was erected by the Historic Chattahoochee Commission and Randolph Historical Society, 2001 , in Cuthbert in Randolph County, Georgia.

" To raise the matching funds, the Cuthbert Woman´s Club spearheaded the effort by having oyster suppers, a womanless wedding, turkey dinners, and ice cream festivals. The first brick was laid on October 17, 1917. On September 5, 1918, the debt was cleared, and the library was officially dedicated. Emily Hillyer Owen became the first librarian. The next librarian, Ida Domingos, served for 27 years. The Carnegie Library Building became the Randolph Chamber of Commerce headquarters in 1997 when the new building was built."