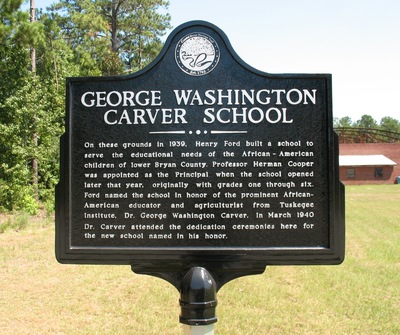 This historical marker is located on the grounds where the school was built for the African American children of lower Bryan County. It was named after Dr. George Washington Carver, a prominent African American educator and agriculturist.

" On these grounds in 1939, Henry Ford built a school to serve the educational needs of the African-American children of lower Bryan County. Professor Herman Cooper was appointed as the Principal when the school opened later that year, originally with grades one through six. Ford named the school in honor of the prominent African-American educator and agriculturist from Tuskegee Institute, Dr. George Washington Carver. In March 1940 Dr. Carver attended the dedication ceremonies here for the new school named in his honor."