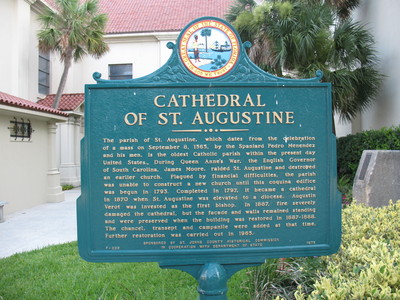 This historical marker is located in the Cathedral Place, in St Augustine in St Johns County, Florida. It is sponsored by the St. Johns County Historical Commission in cooperation with Department of State.

" The parish of St. Augustine, which dates from the celebration of a mass on September 8, 1565, by the Spaniard Pedro Menedez and his men, is the oldest Catholic parish within the present day United States. During Queen Anne´s War, the English Governor of South Carolina, James Moore, raided St. Augustine and destroyed an earlier church. Plagued by financial difficulties, the parish was unable to construct a new church until this coquina edifice was begun in 1793. Completed in 1797, it became a cathedral in 1870 when St. Augustine was elevated to a diocese. Augustin Verot was invested as the first bishop. In 1887, fire severely damaged the cathedral, but the facade and walls remained standing and were preserved when the building was restored in 1887-1888. The chancel, transept and campanile were added at that time. Further restoration was carried out in 1965."