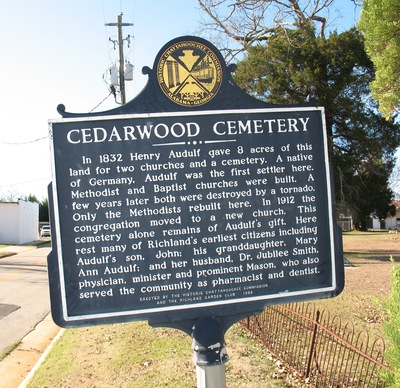 This marker is located at the Cedarwood Cemetery in Richland, Georgia. It was erected by the Historic Chattahoochee Commission and the Richland Garden Club, 1988 .

" In 1832 Henry Audulf gave 8 acres of this land for two churches and a cemetery. A native of Germany, Audulf was the first settler here. Methodist and Baptist churches were built. A few years later both were destroyed by a tornado. Only the Methodists rebuilt here. In 1912 the congregation moved to a new church. This cemetery alone remains of Audulf´s gift. Here rest many of Richland´s earliest citizens including Audulf´s son, John; his granddaughter, Mary Ann Audulf; and her husband, Dr. Jubilee Smith, physician, minister and prominent Mason, who also served the community as pharmacist and dentist. "