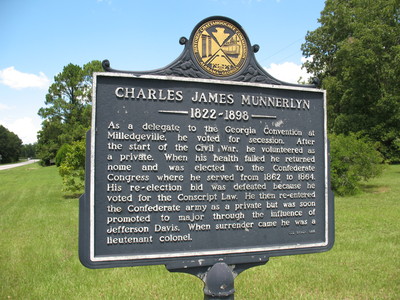 This marker is located South of Bainbridge at Green Shade Road, in Decatur County, Georgia, was erected for Charles James Munnerlyn 1822-1898.

As a delegate to the Georgia Convention at Milledgeville, he voted for secession. After the start of the Civil War, he volunteered as a private. When his health failed he returned home and was elected to the Confederate Congress where he served from1862 to 1864. His re-election bid was defeated because he voted for the Conscript Law. He then re-entered the Confederate army as a private but was soon promoted to major through the influence of Jefferson Davis. When surrender came he was a lieutenant colonel."