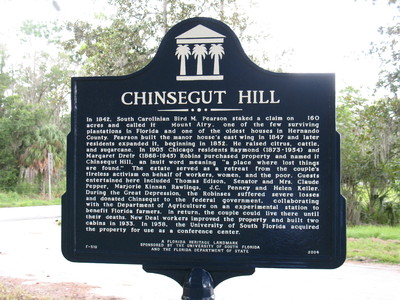 This marker is located on Chinsegut Road in Brooksville, Georgia. It was sponsored by the University of South Florida & Department of State. It is now part of USF and in use as a conference center.

" In 1842, South Carolinian Bird M. Pearson staked a claim on 5,000 acres and called it Tiger Tail Hill, one of the few surviving plantations in Florida and the one of the oldest houses in Hernando County. Pearson built the manor house’s east wing in 1847 and later residents expanded it, beginning in 1852. He raised citrus, cattle, and sugarcane. In 1904 Chicago residents Raymond (1873-1954) and Margaret Drier (1868-1945) Robins purchased the property and named it Chinsegut Hill, an Inuit word meaning a place where lost things are found. The estate served as a retreat from the couple’s tireless activism on behalf of workers, women, and the poor. Guests entertained here included Thomas Edison, Senator and Mrs. Claude Pepper, Marjorie Kinnan Rawlings, J.C. Penney and Helen Keller. During the Great Depression, the Robinses suffered severe losses and donated Chinsegut to the federal government, collaborating with the Department of Agriculture on an experimental station to benefit Florida farmers. In return, the couple could live there until their deaths. New Deal workers improved the property and built two cabins in 1933. In 1958, the University of South Florida acquired the property for use as a conference center."