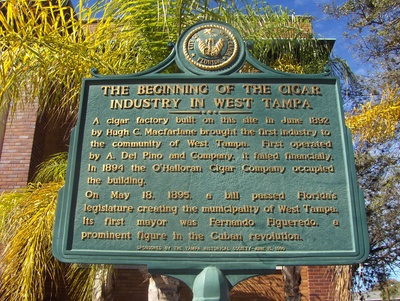 This marker was placed by the Tampa Historical Society, on the site where the cigar factory was built in 1892, in Tampa Florida.

The Beginning of the Cigar Industry in West Tampa

" A cigar factory built on this site in June 1892 by Hugh C. Macfarlane brought the first industry to the community of West Tampa. First operated by A. Del Pino and Company, it failed financially. In 1894 the O'Halloran Cigar Company occupied the building.

On May 18, 1895, a bill passed Florida's legislature creating the municipality of West Tampa. Its first mayor was Fernando Figueredo, a prominent figure in the Cuban revolution."