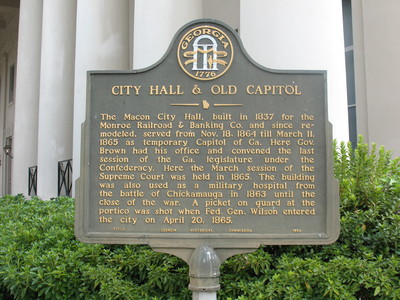 This marker is located in front of the Macon City Hall, which was built for the Munroe Railroad & Banking Company, and later also served as the temporary capitol of Georgia. It was placed by the Georgia Historical Commission in 1954.

" The Macon City Hall, built in 1837 for the Monroe Railroad & Banking co and since remodeled, served from Nov. 18, 1864 till March 11, 1865 as temporary Capitol of Ga. Here Gov. Brown had his office and convened the last session of the Ga. legislature under the Confederacy. Here the march session of the Supreme Court was held in 1865. The building was also used as a military hospital from the battle of Chickamauga in 1863 until the close of the war. A picket on guard at the portico was shot when Fed. Gen. Wilson entered the city on April 20, 1865."