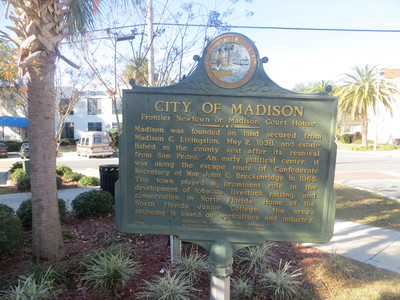 This historical marker is located on the City Hall grounds of Madison, Florida. It was sponsored by The Madison City Commission in Cooperation with Department of State.

" Madison was founded on land secured from Madison C. Livingston, May 2, 1838, and established as the county seat after its removal from San Pedro. An early political center, it was along the escape route of Confederate Secretary of War John C. Breckenridge in 1865. The town played a prominent role in the development of tobacco, livestock raising, and conservation in North Florida. Home of the North Florida Junior College, the area's economy is based on agriculture and industry."