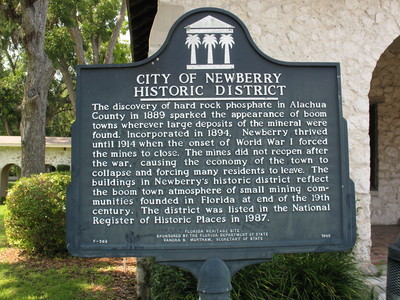 This marker is located in Newberry, Florida and was sponsored by the Florida Department of State.

" The discovery of hard rock phosphate in Alachua County in 1889 sparked the appearance of boom towns wherever large deposits of the mineral were found. Incorporated in 1894, Newberry thrived until 1914 when the onset of World War I forced the mines to close. The mines did not reopen until after the war, causing the economy of the town to collapse and forcing many residents to leave. The buildings in Newberry's historic district reflect the boom town atmosphere of small mining communities founded in Florida at the end of the 19th century. The district was listed in the National Register of Historic Places in 1987. "