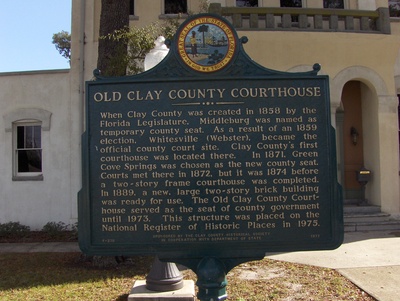 This marker was placed by the Clay County Historical Society, outside the Old Clay County Courthouse, which served as the seat for the county government until 1973.

" When Clay County was created in 1858 by the Florida Legislature, Middleburg was named as temporary county seat. As a result of an 1859 election, Whitesville (Webster), became the official county court site. Clay County's 1st courthouse was located there. In 1871, Green Cove Springs was chosen as the new county seat. Courts met there in 1872, but it was 1874 before a 2 story frame courthouse was completed. In 1889, a new, large 2-story brick building was ready for use. The Old Clay County Courthouse served as the seat of county government until 1973. This structure was placed on the National Register of Historic Places in 1975."