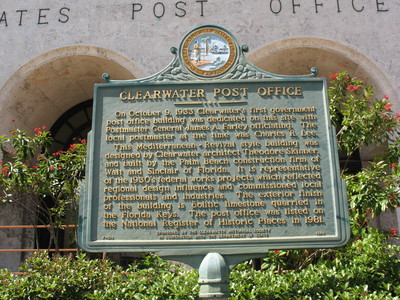 This marker was sponsored by the Clearwater Historical Society in cooperation with the Department of State, placed outside the post office in Clearwater, Florida. This building was designed by Theodore Skinner, in the Mediterranean-Revival style. It was listed on the National Register of Historic Places in 1981.

" On October 9, 1933 Clearwater's first government post office building was dedicated on this site with Postmaster General James A. Farley officiating. The local postmaster at the time was Charles R. Lee. This Mediterranean-Revival style building was designed by Clearwater architect Theodore Skinner, and built by the Palm Beach construction firm of Walt and Sinclair of Florida. It is representative of the 1930's federal works projects which reflected regional design influence and commissioned local professionals and industries. The exterior finish of the building is politic limestone quarried in the Florida Keys. The post office was listed on the National Register of Historic Places in 1981."