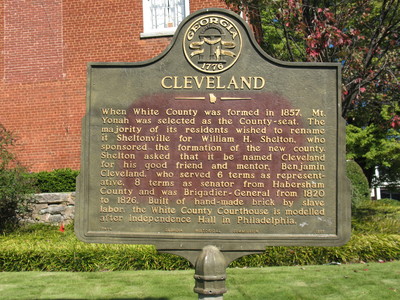 This historical marker is placed outside the old court house in Cleveland, GA. Cleveland was named after Benjamin Cleveland, a good friend of William H Shelton, who sponsored the formation of the county. The White County Court House was modelled after Independence Hall in Philadelphia. It was erected by the Georgia Historical Commission in 1955.

" When White County was formed in 1857, Mt. Yonah was selected as the County-seat. The majority of its residents wished to rename Sheltonville for William H. Shelton, who sponsored the formation of the new county. Shelton asked that it be named Cleveland for his good friend and mentor, Benjamin Cleveland, who served 6 terms as representative, 8 terms as senator from Habersham County and was Brigadier-General from 1820 to 1826. Built of hand-made brick by slave labor, the White County Courthouse is modelled after Independence Hall in Philadelphia."