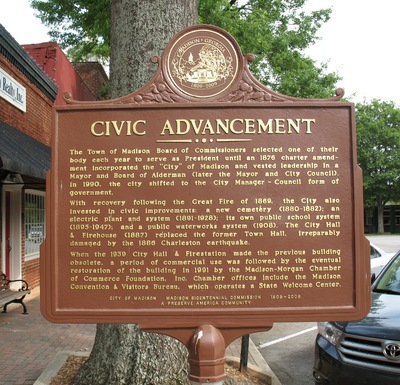 This marker was erected by the City of Madison, Madison Bicentennial Commission 1809-2009, in 2011. It is located at the Welcome Center, at main Jefferson St, in Madison, Georgia. This is to mark the civic improvements done in the city after the Great Fire in 1869.

" The Town of Madison Board of Commissioners selected one of their body each year to serve as President until an 1876 charter amendment incorporated the “City” of Madison and vested leadership in a Mayor and Board of Aldermen (later the Mayor and City Council). In 1990, the city shifted to the City Manager - Council form of government.

When the 1939 City Hall & Firestation made the previous building obsolete, a period of commercial use was followed by the eventual restoration of the building in 1991 by the Madison-Morgan Chamber of Commerce Foundation, Inc. Chamber officer include the Madison Convention & Visitors Bureau, which operates a State Welcome Center. "