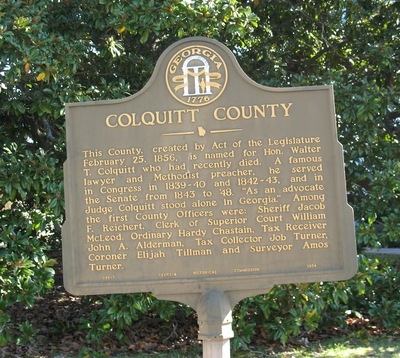 This marker is located at the courthouse in Moultrie, Georgia. It was erected in 1954 noting the creation of Colquitt County, which was named for Walter T. Colquitt, a famous lawyer and preacher.

" This County, created by Act of the Legislature February 25, 1856, is named for Hon. Walter T. Colquitt who had recently died. A famous lawyer and Methodist preacher, he served in Congress in 1839-40 and 1842-43, and in the Senate from 1843 to ´48. ´As an advocate Judge Colquitt stood alone in Georgia.´ Among the first County Officers were: Sheriff Jacob F. Reichert, Clerk of Superior Court William McLeod, Ordinary Hardy Chastain, Tax Receiver John A. Alderman, Tax Collector Job Turner, Coroner Elijah Tillman and Surveyor Amos Turner."