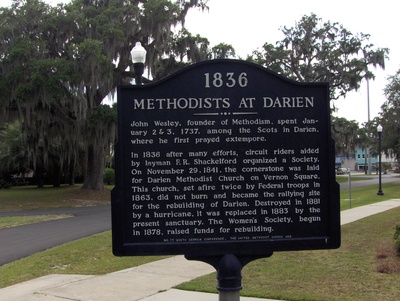 This is located at the Darien United Methodist Church, on Vernon Square, Darien, McIntosh County, Georgia.

John Wesley, founder of Methodism, spent January 2 & 3, 1737, among the Scots in Darien, where he first prayed extempore.

In 1836 after many efforts, circuit riders aided by layman F.R. Shackelford organized a Society. On November 29, 1841, the cornerstone was laid for Darien Methodist Church on Vernon Square. This church, set afire twice by Federal troops in 1863, did not burn and became the rallying site for the rebuilding of Darien. Destroyed in 1881 by a hurricane, it was replaced in 1883 by the present sanctuary. The Women’s Society, begun in 1878, raised funds for rebuilding.