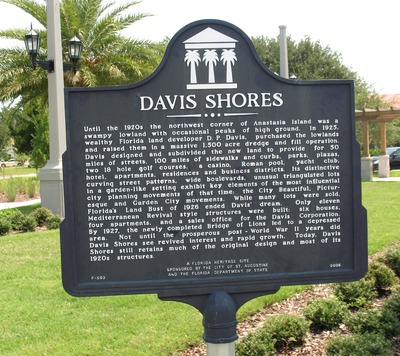 This marker is located at the intersection of Anastasia Blvd and Alcazar St. ( on State highway A1A) in St Augustine, Florida. It was sponsored by the City of St. Augustine and the Florida Department of State.

" Until the 1920s the northwest corner of Anastasia Island was a swampy lowland with occasional peaks of high ground. In 1925, wealthy Florida land developer D.P. Davis, purchased the lowlands and raised them in a massive 1,500 acre dredge and fill operation. Davis designed and subdivided the new land to provide for 50 miles of streets, 100 miles of sidewalks and curbs, parks, plazas, two 18 hole golf courses, a casino, Roman pool, yacht club, hotel, apartments, residences and business districts. Its distinctive curving street patterns, wide boulevards, unusual triangulated lots in a garden-like setting exhibit key elements of the most influential city planning movements of that time: the City Beautiful, Picturesque and Garden City movements. While many lots were sold, Florida´s Land Bust of 1926 ended Davis´ dream. Only eleven Mediterranean Revival style structures were built: six houses, four apartments, and a sales office for the Davis Corporation. By 1927, the newly completed Bridge of Lions led to a depressed area. Not until the prosperous post-World War II years did Davis Shores see revived interest and rapid growth. Today, Davis Shores still retains much of the original design and most of its 1920s structures."