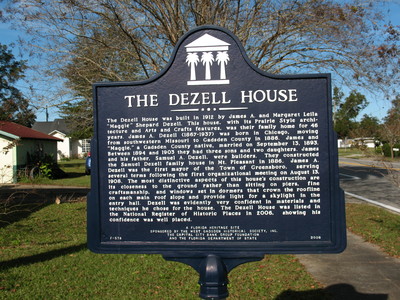 This marker is located in front of the Dezell House, in Greenboro, Florida. This house was built by James A. and Margaret Leila Maggie Shepard Dezell, in 1912.

"The Dezell House was built in 1912 by James A. and Margaret Leila Maggie Shepard Dezell. This house, with its Prairie Style architecture and Arts and Crafts features, was their family home for 46 years. James A. Dezell (1867-1937) was born in Chicago, moving from southwestern Missouri to Gadsden County in 1886. James and Maggie, a Gadsden County native, married on September 13, 1893. Between 1894 and 1903 they had three sons and two daughters. James and his father, Samuel A. Dezell, were builders. They constructed the Samuel Dezell family house in Mt. Pleasant in 1886. James A. Dezell was the first mayor of the Town of Greensboro, serving several terms following the first organizational meeting on August 13, 1908. The most distinctive aspects of this houses construction are its closeness to the ground rather than sitting on piers, fine craftsmanship, and windows set in dormers that crown the roofline on each main roof slope and provide light for a skylight in the entry hall. Dezell was evidently very confident in materials and techniques he chose for the house."

This is a Florida Heritage site, sponsored by the West Gadsen Historical Society, Inc., The Capital City Bank Group Foundation and the Florida Department of State.