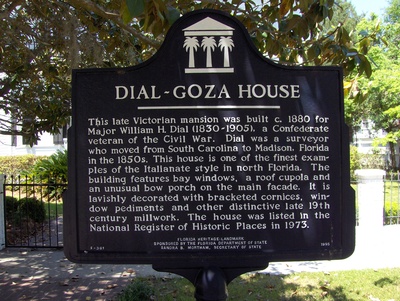 This marker is located in front of the Dial-Goza House in Madison. It was built for Major William H. Dial , a Confederate veteran of the Civil War. It was placed by the Florida Department of State in 1995.

" This late Victorian mansion was built c. 1880 for Major William H. Dial (1830-1905), a Confederate veteran of the Civil War. Dial was a surveyor who moved from South Carolina to Madison, Florida in the 1850s. This house is one of the finest examples of the Italianate style in north Florida. The building features bay windows, a roof cupola and an unusual bow porch on the main facade. It is lavishly decorated with bracketed cornices, window pediments and other distinctive late 19th century millwork. The house was listed in the National Register of Historic Places in 1973. "