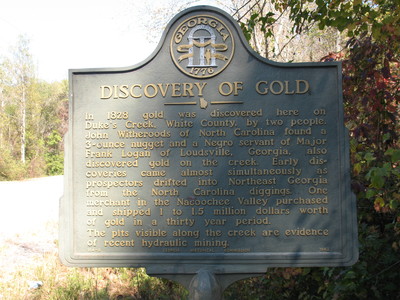 This marker is located north of Cleveland near Duke's Creek in White County, Georgia. In 1828 gold was discovered by John Witheroods and Major Frank Logan. It was placed by the Georgia Historical Commission in 1962.

" In 1828 gold was discovered here on Duke`s Creek, White County, by two people. John Witheroods of North Carolina found a 3-ounce nugget and a Negro servant of Major Frank Logan of Louisville, Georgia, also discovered gold on the creek. Early discoveries came almost simultaneously as prospectors drifted into Northeast Georgia from the North Carolina diggings. One merchant in the Nacoochee Valley purchased and shipped 1 to 1.5 million dollars worth of gold in a thirty year period.

The pits visible along the creek are evidence of recent hydraulic mining.