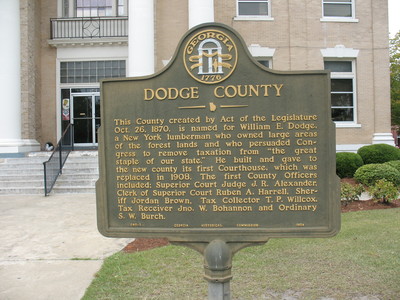 This marker is located at the courthouse in Eastman, Dodge County, Georgia. I t was placed by the Georgia Historical Commission in 1954.

" This County created by Act of the Legislature Oct. 26, 1870, is named for William E. Dodge, a New York lumberman who owned large areas of the forest lands and who persuaded Congress to remove taxation from ´the great staple of our state.´ He built and gave to the new county its first Courthouse, which was replaced in 1908. The first County Officers included: Superior Court Judge J.R. Alexander, Clerk of Superior Court Ruben A. Harrell, Sheriff Jordan Brown, Tax Collector T.P. Willcox, Tax Receiver Jno. W. Bohannon and Ordinary S.W. Burch. "