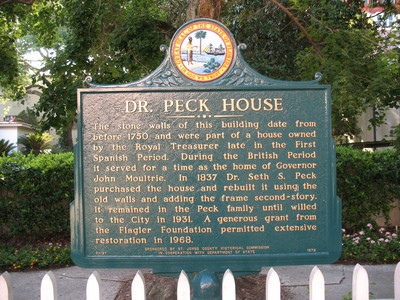 This marker is placed in front of Dr. Peck House on St George St. in St Augustine, Fl. It was sponsored by the St. Johns County Historical Commission In Cooperation With Department of State. Dr. Seth S. Peck had purchased this house and rebuilt it, and remained with the Peck family till 1931, when it was willed to the city.

" The stone walls of this building date from before 1750 and were a part of a house owned by the Royal Treasurer late in the First Spanish Period. During the British Period it served for a time as the home of Governor John Moultrie. In 1837 Dr. Seth S. Peck purchased the house and rebuilt it using the old walls and adding the frame second-story. It remained in the Peck family until willed to the City in 1931. A generous grant from the Flagler Foundation permitted extensive restoration in 1968."