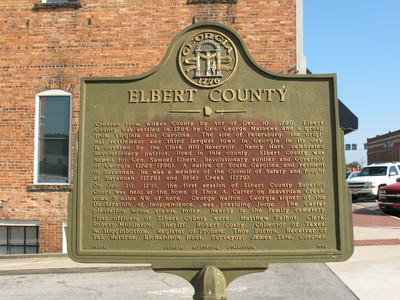 This marker is located in the courthouse in Elberton, Georgia, in Elbert County. It was placed by the Georgia Historical Commission in 1959.

" Created from Wilkes County by Act of Dec. 10, 1790, Elbert County was settled in 1784 by Gen. George Mathews and a group from Virginia and Carolina. The site of Petersburg, the original settlement and third largest town in Georgia in its day, is covered by the Clark Hill Reservoir. Nancy Hart, celebrated Revolutionary patriot, lived in this county. Elbert County was named for Gen. Samuel Elbert, Revolutionary soldier and Governor of Georgia (1785-1786). A native of South Carolina and resident of Savannah (1778) and Brier Creek (1779).