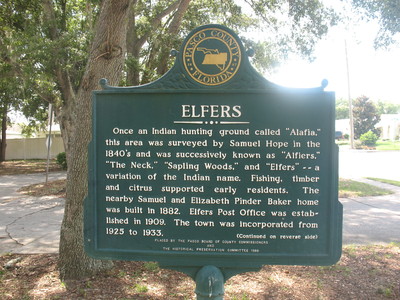 This marker was placed by The Pasco Board of County Commissioners & The Historical Preservation Committee in 1988. This was once a hunting ground called Alafia, later known as Elfers - a variation of the name. Fishing, timber and citrus supported the residents. The Samuel Baker Home was built here and is a landmark of Pasco County.

" Once an Indian hunting ground called "Alafia " this area was surveyed by Samuel Hope in the 1840's and was successively known as "Alfiers", "The Neck", "Sapling Woods", and "Elfers" -- a variation of the Indian name. Fishing, timber and citrus supported early residents The nearby Samuel and Elizabeth Pinder home was built in 1882. Elfers Post Office was established in 1909. The town was incorporated from 1925 to 1933."