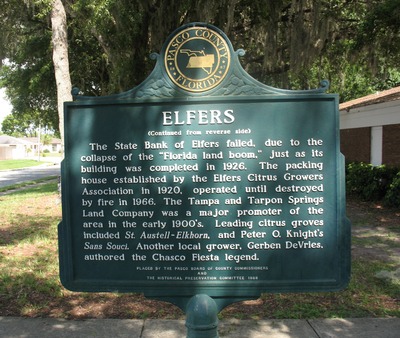 This marker was placed by The Pasco Board of County Commissioners & The Historical Preservation Committee in 1988.

" The State Bank of Elfers failed, due to the collapse of the "Florida land boom," just as its building was completed in 1926. The packing house established by the Elfers Citrus Growers Association in 1920, operated until destroyed by fire in 1966. The Tampa and Tarpon Springs Land Company was a major promoter of the area in the early 1900's. Leading citrus groves included St. Austell-Elkhorn, and Peter o. Knight's Sans Souci. Another local grower, Gerben DeVries, authored the Chasco Fiesta legend".