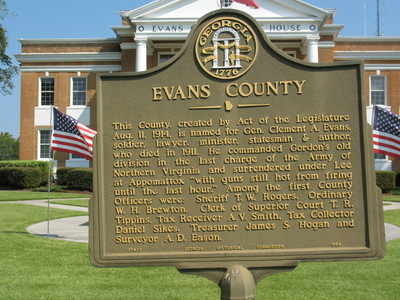 This is located at the courthouse on US 280 in Claxton, in Evans County Georgia. It was placed by the Georgia Historical Commission in 1954.

" This County, created by Act of the Legislature Aug. 11, 1914, is named for Gen. Clement A. Evans, soldier, lawyer, minister, statesman & author, who died in 1911. He commanded Gordon´s old division in the last charge of the Army of Northern Virginia and surrendered under Lee at Appomattox "with guns still hot from firing until the last hour." Among the first County Officers were: Sheriff T.W. Rogers, Ordinary W.H. Brewton, Clerk of Superior Court T.R. Tippins, Tax Receiver A.V. Smith, Tax Collector Daniel Sikes, Treasurer James S. Hogan and Surveyor A.D. Eason. "